1. People come in to see the visual - a soap box and microphone projected + CD of speeches for atmosphere.

3. Set the soap box idea up - People given a number to make their great speech. Tickets will have a time on. 8.15, (possibly making provision for people to prepare before giving their speech)

4. Explore a range of ideas in three groups
A) still small voice
B) those with a voice those without a voice
C) speaking beyond words

7. Some all together feedback
Speaking out when you can't be heard
Verbalising out loud - what's it like?

8. reading and liturgy from Ezekiel 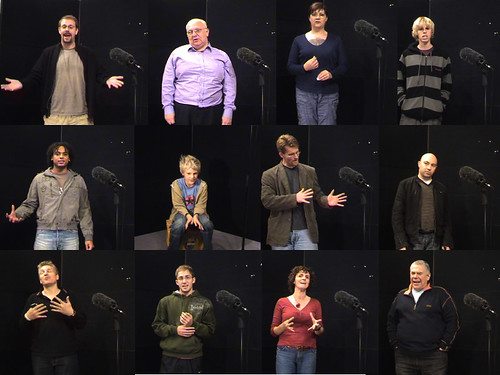 In the beginning God said... and there was - language makes the world

The heavens declare the glory of God... day after day they pour forth speech... there is no language where their speech is not heard - the world speaks

In the beginning was the word - Jesus God's great speech?

Let your speech always be with grace, seasoned with salt that you may know how you ought to answer one another - words of grace

A gentle tongue can break a bone - powerful words

Pleasant words are like a honeycomb, sweetness to the soul and health to the bones - healing words

A time to keep silence and a time to speak...

Welcome to Grace. You've probably guessed that tonight's theme is speaking. This is the first in a series of three service on speaking, listening and seeing (Because we want to use the stained glass the seeing one won't be until the summer).

As we have talked around notions of speech, words, speaking, comunicating we have realised it's a big subject. There are also lots of scriptures about it, a few we've touched on here. At the next Gracelet we'll particularly look at some proverbs that touch on speech. But for tonight we have narrowed down somewhat to speaking out...

The track we have just listened to is called Libations by Ursula Rucker. You probably haven't heard of half the people she cites but what we liked about it is that it just lists and lists people who have spoken out for liberation whether in literature, art, sculpture, music, preaching or whatever form. Not all the people listed are Christian but as Christians we have a pretty good heritage in this regard whether we think of the prophets, MLK, Wilberforce, Shaftesbury, Jesus or whoever... We stand in a long line of speaking out with the question hanging over us - what do we want to speak out about?

It may be a bit cheesy but we have got a room with a soapbox in. And we'd like to invite you or as many are brave enough to make your great speech for one minute or so. Before you get worried we are not going to pump the sound out so it will be just you. We'll be able to see you on the screen but not hear you. You'll have a few minutes to think but you could speak out about injustice in Uganda, the environment, Jesus and what he calls us to, generosity, the church, the poor, racism... Why? Well it seemed a good idea when we were planning. We'll talk about it later in the service but we think there's something scary about speaking/voicing something out loud, but there's also something good about it.

The way it will work is that we have a series of tickets (much like the supermarket deli counter) with times on. Go to make your speech so that you are at the door at your time. You have about a minute which isn't long. I'll knock on the door when your time is up if you go on too long! Not everyone has to do this - we don't want to tip anyone over the edge. But equally it will be a shame if no-one speaks...

We thought it might be worth reflecting on your great speeches...

Turn to a neighbour and tell them what you spoke about (or would have).

(Altogether)
How did it feel to verbalise out loud?
How did it feel to be speaking and not be heard?
We set up a cheesy soapbox - I doubt any of us want to get on a soapbox... Turn to your neighbour again and think what ways might we be able to speak out?